The Million Dollar Race for the CBD Market 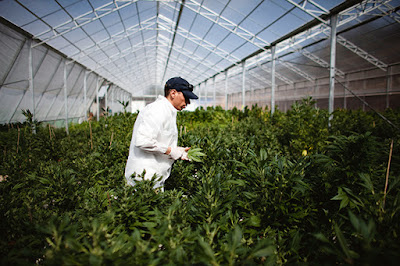 The recent resolutions of the CFM (Federal Council of Medicine) to support the compassionate use of the CBD and Anvisa (National Agency for Sanitary Surveillance) to reclassify CBD as a substance that can be prescribed by doctors indicate little progress in the fight for Direct use of medicinal cannabis. The same decisions, meanwhile, mean a big green light for companies interested in exploring the cannabidiol market, and the industry has already moved. While some patients report that CBD's industrialized extracts work wonders, others complain about the abusive price and even doubt the quality of these products.

Is this the safest way to go? Is favoring the industry a necessary evil? Or are we putting patients in an even more complex situation?

If you are in any way involved with the movement by using medical CBD, you may have heard of companies named: HempMeds , Dixie , Medical Marijuana Inc. , KannaWay , KannaVest , KannaLife , etc. These companies have specialized in selling "hemp oil," which according to the label is rich in CBD and contains an insignificant amount of THC, less than 0.3%. In fact, all these companies are run by the same group of people, an interesting combination between traffickers and people being investigated for different types of fraud.

These companies pretend to associate and buy each other's shares so they can be valued and get investors. Research conducted by the association Project CBD in the United States has brought to light sordid revelations about the operation of these companies, which arrive in Brazil through HempMeds Brazil. Because HempMeds is not authorized to sell drugs, the hemp oils they produce are sold as food supplements, but the company uses buzzmarketing to do advertising focused on patients who need the CBD, especially children.

It works as follows: HempMeds representatives offer the expensive RSHO (Real Scientific Hemp Oil) for free to parents of children with refractory epilepsy, on condition that they tell other parents the benefits of the product, post videos on the treatment of Your children and pass the word on. As 10 grams of the product cost $ 599, not counting the import taxes and taxes, many parents are happy with the agreement, especially if the medicine has helped their children. The company, therefore, gets an advertisement with relatively no cost to the company, to sell a product for purposes that it has no authorization (or quality control), using desperate parents and patients. Prescription of these imported products was supported by CREMESP (Regional Council of Medicine of the State of São Paulo) and CFM.

There is one fundamental problem in the production of hemp oil: hemp is not the best source of CBD. It is a variety of cannabis commonly used in the manufacture of vegetable fiber, for the production of fabrics, fuel, motor oil, furniture, etc. Hemp has a lower concentration of cannabinoids and therefore a large amount of plant is required to produce a few grams of oil. Hemp also has the property of absorbing toxins and metals from the soil and therefore, if used for consumption, should be planted in organic soil without addition of pesticides.

It is not known where hemp comes from HempMeds products; Rumor has it that it is imported from China or Romania. Large hemp plantations, especially focused on the production of fiber, Would not take precautions such as the use of organic soil, natural fertilizers and the non-use of pesticides, for the sake of practicality and cost. Thus, there is a concern about the quality and safety of RSHO.

There are reports of children and adults who had severe abdominal cramps after consuming the oil, which had some samples analyzed as containing high amounts of heavy metals and hexane, a toxic industrial solvent. Despite the dubious operation of the companies producing hemp oil, which has been erroneously called CBD oil in Brazil, the US government granted to KannaLife in 2012 a patent number 6630507, which grants them exclusive rights over the production of medicines Based on cannabinoids. It is an exclusive license for the company to develop drugs for the treatment of hepatic encephalopathy (brain damage caused by liver diseases).

Several researchers, especially physicians such as Paul Armentano and Sanjay Gupta, argue that the best source of CBD are the cannabis-rich cannabis varieties, such as Charlotte's Web, Harletsu and Avidekel. Firstly because the effects of CBD are potentiated by THC, albeit in low quantities - Charlotte`s Web, for example, has less than 1% THC. In addition, the presence of other cannabinoids and terpenes (plant substances) that also have therapeutic value may aid in the treatment of the patient.

These plants are also safer sources of CBD, because with the high concentration of cannabinoid, little plant is needed to produce the drug, allowing greater control over the product and reducing the risk of intoxication by external agents.

Popular posts from this blog

Micro-level management is not effective in trading

July 11, 2018
You will many people in your trading career that are obsessed with micro-level management in their trading. They want to control everything from the price of currency pairs to news and information. You may think they are control freak but they do not have the right understanding of the market. They think if they try to focus on each and every parts of their trading career, they will be successful. A successful trader is a combination of a successful strategy, good timing of entry and exit and trading with good trends. If they can work as micro level with each of the small issues, they can improve their career. This is a wrong misconception and if you read the article, you will find why micro-level management is not effective. It may seem attractive and was supposed to work out perfectly but it does not. There are many myths of managing trades micro level and this article will clear your mind of this myth. Balanced trading strategy Those who deal with all the details of the ma
Post a comment
Read more

October 19, 2018
National Service (NS) is one of the key foundations, together with multiculturalism and religious harmony, in Singapore's unique social fabric. Every male of the modern generation has gone through the rites of NS, including our very best athletes. These athletes leave their schools as future sports champions of our nation, but very few of them actually fulfill their potential to do Singapore proud in international competitions. What happened to these potential sports stars? Did NS hinder their passion and motivation to excel in their sports? Why do so few carry on in their sports after school and NS? In our national quest for more sporting excellence and glories, perhaps it is time to re-look at our NS policy and see how we can truly support and encourage the journeys of these potential sports stars without necessarily compromising the security of the nation,   먹튀 . The argument that NS is detrimental to the development and continuous journey of our budding athletes from sc
Post a comment
Read more

Tips For Booking a Cruise With Royal Caribbean

March 15, 2018
If you're a first time cruiser or it's been a while since you've done it, you may not know some of the neat little tricks regarding booking a cruise. There's a bunch of great forums at cruisecritic.com which can give you tons of tips, but if you don't have time to read it right now I'll give you the highlights Cruise Forums Royal Caribbean  . First, book early. If you don't live right next to the port you'll want to book early so you can secure a good price on your airfare. The other advantage is that you get a better pick of cabins. Where you want the cabin location depends on your personality, but in general you'll want something in the middle (bow to stern and top to bottom) if you don't want to feel much movement. You likely won't feel much anyway, but if you're concerned about it go midship. Also, with Royal Caribbean, even if you've already booked, you can still get a refund on the price if the cost of your room catego
1 comment
Read more
Report a bad business